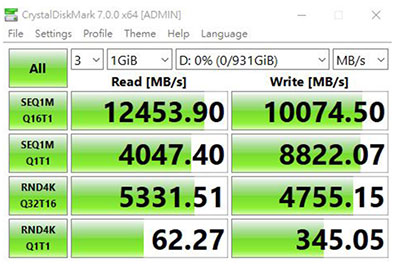 Gigabyte on Friday announced one of the industry’s first solid state drive with the PCIe 5.0 x4 interface aimed at high-end client PCs. The Aorus Gen5 10000 drive offers about 75% higher sequential read performance than even the most expensive PCIe Gen4 drives and will be available in the coming weeks or months. Meanwhile, since it is based on an off-the-shelf Phison design, it will not be the only SSD with a PCIe Gen5 interface. However, given the performance specifications offered by the Aorus Gen5 10000 SSD, we have no doubts that it will be one of the best SSDs available this fall.

Gigabyte’s Aorus Gen5 10000 SSD is based around Phison’s PS5026-E26 controller (Arm Cortex-R5 cores accompanied by special-purpose CoXProcessor 2.0  accelerators, 8 NAND channels) as well as recently announced ~200-layer 3D TLC NAND memory with a 2400 MT/s (though Gigabyte does not specify whether we are dealing with memory from Micronor SK Hynix).

The manufacturer intends to offer its new high-performance M.2-2280 drive in 1TB, 2TB, and 4TB configurations. In addition, the company will ship its Aorus Gen5 10000 SSD with an easily removable full-covered copper heatsink so users can choose whether to use the drive with it or instead go with an M.2 cooling solution featured by their motherboards.

Gigabyte’s Aorus Gen5 10000 SSD and Corsair’s MP700 product are among the first solid-state drives to use Phison’s PS5026-E26 platform, the first generation offering from the controller developer. Because a PCIe 5.0 x4 interface offers raw bandwidth of up to 15.8 GB/s in each direction, we expect eventual PCIe Gen5 implementations from Phison to offer even more performance. Still, for now, the E26 is the only client platform for PCIe Gen5 SSDs.

Gigabyte does not reveal pricing or the exact launch window for its Aorus Gen5 10000 SSDs. Still, we could speculate that the company will charge a premium for the extreme performance offered by these drives and will try to launch them when new PCIe 5.0-supporting platforms from AMD and Intel are available.

Next post Want to break into tech? Software devs say to learn these coding languages

Amazon held its annual fall hardware event on Tuesday. As in years past, the company had a lot to share...